Traditionally, companies have deployed desktop or laptop computers to their end users.  The operating system, applications have been individually installed on every desktop or laptop via imaging software or remote installation, and application configuration settings and most user data is stored locally on the computer.  While this may have worked when the company started small, as the company grows, the strain on the IT department to administer, support and troubleshoot all these individual desktop PCs has become a costly management nightmare.

To alleviate this burden companies have implemented many types of distributed system management technologies like roaming profiles, electronic software distribution, patch management and file shares, which can be challenging and complex with too much time spent on administration.

PCs do break and they have to be fixed or replaced. Mechanical parts like fans, hard drives, processor fan, CPU fans, and electronic parts that have to be upgraded (memory), video cards that go out. 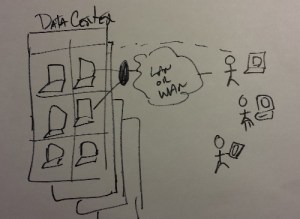 Additionally, it is difficult for users when they go home or work off-site, to access their applications and data, and this can further be challenging across across a wide area network.

Virtual desktop Infrastructures is a generic term referencing the environment which delivers virtualized desktops, where the desktop and associated applications, are separated from the physical client device, to end users.

Virtual Desktop Infrastructure (VDI) is a desktop-centric service that hosts user desktop environments on remote servers and/or blade PCs, which are accessed over a network using a remote display protocol. A connection brokering service is used to connect users to their assigned desktop sessions. For users, this means they can access their desktop from any location, without being tied to a single client device. Since the resources are centralized, users moving between work locations can still access the same desktop environment with their applications and data. For IT administrators, this means a more centralized, efficient client environment that is easier to maintain and able to respond more quickly to the changing needs of the user and business.

While many factors impact  real-world VDI infrastructure cost, scale and performance,  VDI will not cost you any more in hardware and software expenses in the long term.  Although in recent years the VDI cost has come down considerable, the initial investment in VDI can still be high.   The expectation is that the cost to continue to come down over the next few months/years, to the point that they are second nature commodity.

The savings is going to be obtained in your day-to-day operational expenses and  not necessarily capital expenses. For example:

There are three main vendors that provide hypervisors to the VDI market:

All of these vendors allows you to customize the desktop by virtualizing and delivering a single image model where a gold master is used for a base image of the virtual desktops. The base operating system and applications are the same, so that a single image is rolled out to all users.