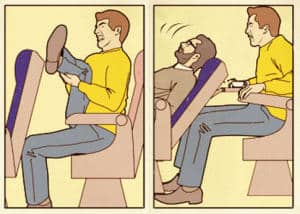 I have noticed that the airlines I travel in,  there has progressively been a bit less leg space, and the seats were switched to the new “thin” style ones..   I have known for a while that this was a trend, and it was happening, but did not think much of it until this week..

The first time I saw this, was in 2012  there was an Time Magazine article: “Sit Tight”   telling about the smaller/thinner seat was coming…  In 2013, there was a WSJ  Article: Incredibly Shrinking Seat” noting that the seat-width  was being reduced from 18 to 17 inches, which is smaller than a stadium seat!..  In a March 2014 WSJ article: “Why This Plane Seat Is the Most Profitable”   showed a pretty cool comparison of airline seats.

In a new article last Friday,  the WSJ  noted that they are not only using the “thin-seats” but also reducing the leg space by 2 inches and removed a bathroom,  in order to fit 8 – 20 more passengers depending on the aircraft type…  Some of the graphics  in these articles tell the story:

This past week I spent well over 12 hours on flights (eight flights) , four of  which were over 4 hours. I have was upgraded once, and travelled 2 flights in middle seats.  It was hard.

Even though some of the planes have upgraded with electric plugs and WiFi access, normal people can not open the laptop to work comfortably.   We got to get some of the airline executives travelling in COACH.

Where do we, as frequent travelers draw the line?

Look at what is coming if we are not careful: 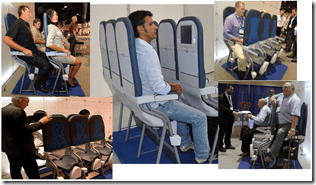