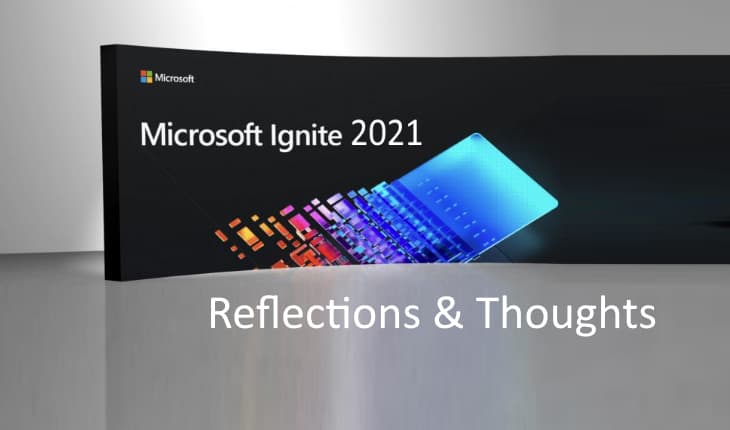 Microsoft Ignite happened as a virtual conference in early March this year. A few things were said (or not said) that resonated with me that I wanted to mention.

First and foremost – it was interesting to note that in the Microsoft published Event Book of News there was only a few a few times the term Windows ( in fact, only 6 of them) was mentioned. This is pretty big as a lot of past conferences Windows took center stage. For many this marks a point in which the device OS takes a back stage to the apps or platform that it represents. For Microsoft, this year was all about Microsoft 365 platform as a whole

Second point is the focus placed on Microsoft Teams as the front end for all Microsoft 365 Enterprise apps related topics. I do not recall if I read or listed to this somewhere, but Microsoft Teams has become the “hotel lobby” for the vast and complex pieces of the puzzle. It is the user interface for the rest of Microsoft 365. I think this is pretty cool analogy. (There are plenty of service corridors you can use if you are into it :-), but for most users the lobby, the front desk, the bar / restaurant, the elevator and their rooms will be all they want to use.

An interesting note was that Microsoft chose to schedule a separate session for Microsoft Endpoint Management called:

The sessions were excellent and cointained lots of useful examples. It was repeated 3 times to allow audience in all time-zones. Decks and recording were posted by Microsoft here

Side note: Another conference worth mentioning in this article is the Nordic Virtual Summit 2021  — WOW! Two days, filled with content in three different tracks: Endpoint Management , Security & Compliance and Azure & Automation. Unfortunately it was not officially recorded, but I am sure you can find the sessions “out there” 🙂

Microsoft Ignite 2021 sessions on Windows and Modern Management include: