I am posting this in the hopes that It can save someone time, as I am sure this will not be a one-off occurrence… If you want to skip to the short summary click here.

I was expecting to have a quite and relaxing Sunday morning My plans where limited to to mowing the lawn, watch the game and catching up on personal emails.   Suffice it to say, not everything went according to plan.

As with a lot of us in the neighborhood, we have raised a raised water drain cap in the back lawn…   A while back the black cap was nicked by a lawn mower service provider. 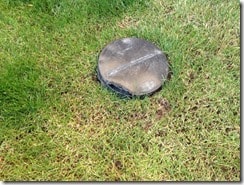 No big deal – It is small and almost unnoticeable… A week or so later, I asked “A” (you know who!),   how to go about fixing this  and he said it was easy to replace.  Just go to the hardware store, get a new one.  It comes off really easy and just replace it.  It sounded so easy, I just put it in my to-do (chore) list  and have been in the back-burner for a while.   Will her around when I have more items on the list I said.

I have cut the grass for about 3 months, and  today, I did not raised the mower to the appropriate height in the back and bam! it went  (not enough coffee and in a hurry to watch the game). Yikes I said!   It was 10:30a…

My first though:  If I do not fix before wife comes back she will not be happy (have been on the back-of the list for a while already).   Second though:   Can this wait until the game is finished?   Nope – there is a storm coming at the end of the day, and this needs to be done now…   Third though (almost simultaneous):  remembered what “A” said:  “ easy enough job” , so no sweat, lets do it..

I fooled around (on the ground) for 35 minutes trying to “unscrew”  the cap (at this point “stupid thing”)  … It did not work, so I started to  digg around it.

Another 10 -15 minutes trying… Nope, no can do.  The stupid thing does not come off…

Nothing to fit an 8” pipe is available.  Recommendation from the clerk: go into the larger hardware stores in town…  Off  I go to Home Depot, where I look and ask a couple of folks… Nothing there either…  Off  to Lowel’s: NOTHING…

At this point I am starting to look for alternatives…  Maybe a sprinkler box ?  Would look nicer than what we had…   Nothing for 8 inches.  They had 7” and a n 11” box only… (good thing!)

I come across a gentleman (customer that must have seen my at this point worried face and overheard my interaction with the clerk) that tells me to call McLendon’s  in Renton.  They have more “construction-related” stuff  and more likely  will carry such a “large cap”

After calling them,  they confirm they have it! YEAH! — So I drive down to Renton to it.

The plumbing guys (nice guys)  explain to me that some time these do not come off easy, and you have to cut  the old one.

As a side note:  Everyone I asked was puzzled by the draining system I had… (Just saying!).

At this point (1:30p) I am happy… I got replacement, and instructions that it is ok to cut the stupid thing…  Celebration time… (It was waiting for me !)

Drove back home,   ( Side note: I love this place!  Specially on a beautiful day…)

It was 2:45p     Crisis solved. Feeling accomplished The game was over (we lost )

By now, I am feeling pretty accomplished.

“A” was right! it is really easy if you have done it before, and you have the parts to replace it.

Hope this helps save you some time in case, like me,  you run over the drain pipe cap with your lawnmower…    I am sure it happens to anyone!    Next time I am in Renton, I will swing by McLendon Hardware Store , and buy a couple more caps – just in case…

How to replace the 8” drain pipe cap:

1) To get a new one go to McLendon Hardware Store in Renton and ask for an 8”  Snap End Cap:

3) Cut the old cap, replace with new one and the fill the hole around one with the same dirt:

Final result  (side by side old an new) :