Windows 11 is Out and About 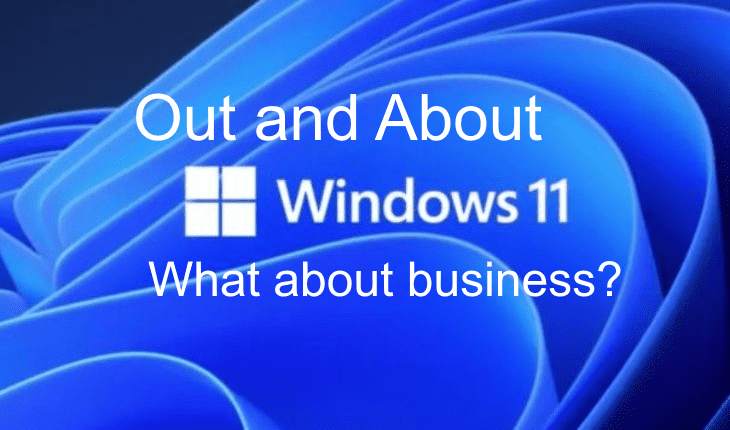 Yes! Windows 11 is out and about! Microsoft released released on Oct 5, 2021 and it has been interesting to read / listen to all of the reviews and comments out there.

Introducing Windows 11 – A new Windows experience bringing you closer to the people and things you love.

First let me say that I write this from the lens of my customers point of view. This is not a post about consumers adopting Windows 11 but medium to large businesses.

I have written a couple of different blog post about this topic, and was updating my original one as news and activities came up during its release. But now that is out with I thought it would be good to summarize it all on one post.

The main question I am getting from businesses is:

What are the key differences I need to know between Windows 10 and Windows 11?

For businesses I boil it down to the following:

There are many others, including some relating to speed, security and management,

System requirements were indented to be pretty clear ( you need a modern PC with TPM) , but many exceptions and work arounds have already popped up. I think this will tighten over time, but the the Feature-specific requirementfor Windows 11 is a must reference for organizations to look at for sure.

Microsoft Summaries the key differences between Windows 10 and Windows 11 in the following chart:

Microsoft has provided a list of items that did not make it to Windows 11:

Should you update now?

I am sure this will change middle to later next year, but I do not know of any large organization actively updating to Windows 11 right now. Like in most previous major upgrades organization typically skip the first releases and wait a bit for consumers to “kick the tires” before updating. Device driver availability, OS platform stabilization and learning curves usually contribute to this “wait period”.

Although there is no significant (none that I have heard of as of this point) application compatibility issues there is the many interface that users need to get used to with this release and organizations will probably want to prepare users for that.

I have not seen a major driver for business to update to Windows 11 yet. With 1,461 days left on Windows 10 there is not a lot need to accelerate adoption of Windows 11, with the exception of one item: the fact that major updates are now done annually instead of twice per year.

Special Call out to good a video

One of the best summaries of changes I have seen was done in the TrigrZolt YouTube Channel His video follows: