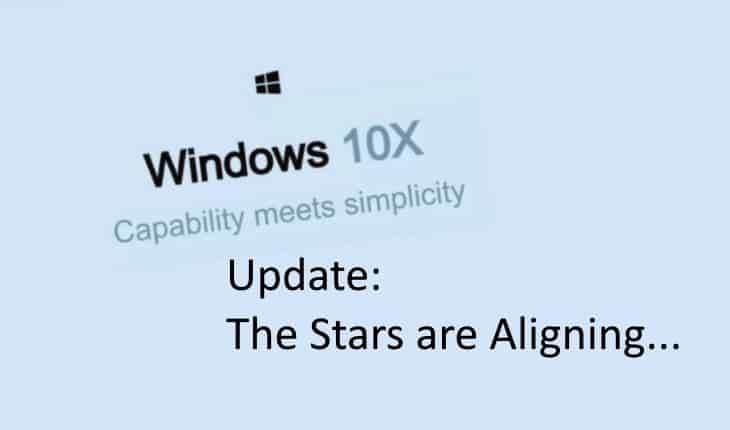 Back in February 2020, I wrote a blog post Windows 10x: A New Windows version. Since then there has been a few changes I figure I would call out in this refreshed post…

First and foremost, it is no longer just for “dual-screen PCs” but instead, Windows 10X is a lightweight version of Windows 10 intended to go head-to-head with Google’s Chrome OS.

Side note: as of this writing, Microsoft has not confirmed but it is widely believed that Windows 10X will not run Win32 apps.

Microsoft has lost a lot of ground in the the K-12 education space to Chrome OS and its eco-system. (estimates indicate a 60% marketshare for Google) With the move to remote-learning, many educational institutions have moved to the easy to manage and deploy Chrome OS based devices.

In a report on Business Insider Microsoft’s corporate vice president of Education, Eran Megiddo is said to have said that Microsoft has a “clear roadmap” for taking on Chromebooks in education and added that “It is a big opportunity for us. Google sees it as well, as does Apple. We’re making progress relative to the competition,”

With the evolution of Microsoft 365 platform which includes, Identity and Access Management, Core Device OS, Productivity and Collaboration, Security and device management, and the fact that its core browser is Microsoft Edge Chromium, Microsoft has all of the elements it needs to focus on a market that has traditionally had difficulty deploying, managing and supporting full Windows 10 devices.

As with Chrome OS, Windows 10X is a cloud-first system where files are expected to reside on the cloud, web-apps are the norm and it updates are automatically and “invisibly” pushed to devices. Think Device Management Portal, Windows Autopilot, Microsoft Intune, and MSIX applications.

Last week, a Windows 10X version ( Windows 10X Build 20279) was leaked which can be installed on a PC, and according to reports, it was a near-final build.

Windows 10X is a new streamlined version of Windows designed for security and performance that Microsoft announced in 2019 and plans to launch in Spring 2021 on a new range of devices.

As I mentioned on my previous post Microsoft Cloud PC is suppose to use be using Windows 10X as its core OS, but who knows! —

Should be an interesting Microsoft Ignite 2021 coming up!!