While researching, I ran into an October 2012 article on dazeinfo.coma  which mentions that while  iOS 6 Adoption Rate is about 60% iPhones Updated To iOS 6 vs. about 2% of Android have Jelly Bean (v4.x).

This made me think a bit….   How can this be ?  Is this possible?     How can Android platform be so fragmented??  Why don’t I have Jelly Bean on my HTC phone?    A few theories came to mind:

A couple of disclaimers:

, as of November 2012,  the statistics (based on visitors to their partner network sites)  for tablet/mobile Operating System  are:

But the real truth is  that is much more fragmented than this…. This slide from one of Apple’s keynotes back in June 2012 summarized the challenge, and importance of the topic: 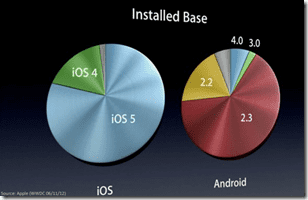 Even thought Android market share continues to grow, there is a definite disadvantage to the version segmentation.   I understand that  numbers on the newer versions will improve significantly as people replace their phones, but I can only hope Google, manufactures and carriers all make a strong effort towards reducing fragmentation moving forward…